In the weeks following my performances of How to be a Man at Ovalhouse I have been doing a lot of thinking about the show, based on conversations with various people that saw it and on more research that I’ve been doing.

First off this fairly obvious, yet somehow controversial, statement: Gender is fluid. It does exist but it is not a constant. It’s not a case of, I think/know I am a man therefore I am. I’ve had days/weeks/months maybe even years in which I have considered myself a man. But that is not permanent, because sometimes I will do something, think something, say something that will make me reconsider. I will enter a state of crisis in which I no longer know that I am a man, or that I ever have been or ever could be or even want to be.

One of the major breakthroughs in thought that I have had is that this show isn’t actually about How to be a Man. It is in a sense, but it’s not about the superficial things such as how to dress, how to make friends, how to hug etc. Those things are explored in it, but not because they are important in themselves. That doesn’t make much sense really, so I’ll attempt to elaborate…

The way men are expected to behave, to dress, to talk etc. are all based on a system that has developed since the dawn of civilisation. Obviously what I’m referring to is patriarchy. The system that gives white, middle-class, straight western men the greatest portion of power in the world. So yes, I do discuss those things, because they are a product of patriarchy, that system that determines where everyone fits in the world, how they must exist and how much power they have. They are, as I say in the show “a basis, a starting point – what a man is” as opposed to what a man should be. They are the signifiers of patriarchy.

There are a lot of things I want to say about patriarchy and the crisis of masculinity, and it may seem a bit all over the place, but I’m writing this as a way of trying to order my thoughts, so please bear with me. Or stop reading if it gets a bit too disordered. First off I need to say that this is a rejection of patriarchy from an almost entirely hetero-masculine standpoint. There are many, many, many more reasons patriarchy should be rejected. Women, LGBTQ individuals/communities, other ethnicities have far more powerful reasons to reject patriarchy. But there are two reasons I don’t talk about these reasons; 1) I am not a woman, I do not identify as LGBTQ and I am white-British, I have no experience or right to make any arguments on their behalf and 2) men need to realise that they are just as damaged by patriarchy, even if it is in different ways.

Men are victims of patriarchy for a few reasons. First off, the definition of Man means that men have become hemmed in. If you are a man and you don’t want to be ostracised and you want to enjoy the power and privilege that you ‘deserve’ then you have to act, dress, talk and think in a certain way. Anything other than that certain way is not Man, and therefore you not only lose your power and privilege, you can no longer be defined, you fall into that hated group of ‘Other’ and are in every way wrong. Men are limited by patriarchy; it is not so easy for a man to express himself emotionally or spiritually. It shows weakness, and weakness is not a characteristic of a man. You can be flawed, but those flaws are only allowed to make you stronger. One of the consequences of this in recent years is that amongst men under the age of 50, the most common cause of death is now suicide. There are a lot of articles, journals etc. that explore this in greater depth, but think about it for a second. If you are a man between the ages of 15 and 50, you are more likely to commit suicide than to die of cancer, or a traffic accident. There’s got to be a link between that and the stigma that surrounds men who talk about their feelings.

The other reason men are victims of patriarchy that resonates with me is that men now are not the cause of patriarchy. I didn’t have anything to do with the oppression of any groups of people, be they women, ethnic groups or LGBTQ communities. It wasn’t me. BUT, I am a product of patriarchy. More than that, I am a beneficiary. I don’t want to be, but I am. I actively engage in being a beneficiary. Someone in the exact same position as me in life (same age, job, education, experience) that is not a white, middle-class, straight western man would be worse off than me. I have very little say in that (that’s not to say that I shouldn’t say something about it, it’s just that on my own grumbling about it I can do very little to change it) Add to that the fact that I grew up surrounded by the dogma that I deserve more because I am a man, that women are objects for me to own, that I should be paid more, that my opinions are more important. I know all of that is bollocks. I know that it is not actually true. I know that consciously but every now and then I catch my unconscious mind, having been force-fed this tripe for the last 26 years, thinking that women are objects or that I deserve more and better than anyone who is not me.  The result is an internal struggle between what I know to be true and what I’ve been told is true. I end up with an overwhelming feeling of guilt. Male guilt, much like white guilt. I didn’t do it, but as a result of it I am better off and others are worse off. I want to make amends, to apologise and make things right but I also don’t want to lose my privilege, who would? But I need to overcome my instinct to remain better off than everyone else, because I know that it’s wrong.

That, by the way, is what I think the crisis of masculinity really is. Not a crisis of not knowing how to be a man, but a crisis of wanting to maintain my privilege vs the knowledge that I don’t deserve it. That crisis is what How to be a Man is really about. It’s about how to overcome this crisis.  It’s about the struggle between what I’m told I am and what I really should be. It’s about the desire to beat down that internal voice in a man’s head that says ‘I deserve the privilege I have’. It’s about pointing at and mocking the ludicrous and contradictory signifiers of masculinity*. It probably doesn’t do all those things, but it should.

I think I’ve exhausted my capacity for this post. I am fairly certain that I have more to say, but right now I don’t know how or exactly what to say. I hope this has been clear, but I’m well aware it’s not been. Thoughts and comments appreciated. Also questions.

*That, incidentally, is not hard to do. You don’t realise how easy it is to make fun of Man Hugs, for example, until you find a completely serious five step guide to hugging another man. I don’t even need to embellish the guide. 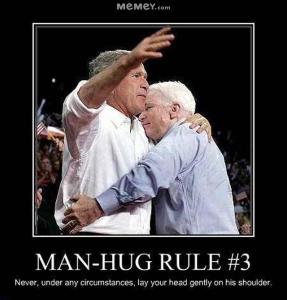 (This is close to one of the roles, but mine has more to it)